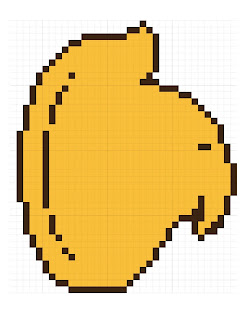 I'm posting my first ever, hopefully not the last, series of freebie patterns here on the blog. Of course, I'd rather you give me money and buy patterns from my shop.....

here's freebie pattern #1: a marshmallow peep. Yellow. Chick. Marshmallow. Yummy. It's Easter personified from a secular viewpoint. Personally, I like them best stale. They're also good roasted over an open fire.

Making the Jump to Blog world... 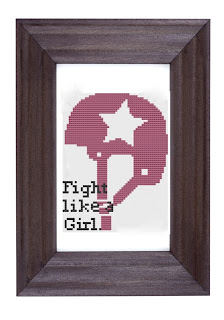 I (well, one of my patterns, anyway) was featured in Tracey Knits' blog. This is the first time (to my knowledge) that one of my patterns has made the jump from etsy/facebook to a stranger's blog. That's right, I don't know her and didn't pay her or anything! Hooray!

Check it out. She's feminist, sporty, geeky, and crafty. My kind of woman.

http://www.traceyknits.com
Posted by PickleLady at 5:19 AM No comments: Links to this post

Posted by PickleLady at 6:09 AM No comments: Links to this post

Six months ago today, my darling 6 year old baby (now 7) ran through the campground chasing her sister, tripped, and fell into the fire pit. While there were no flames, there were plenty of hot coals left over from breakfast.

I was about 10-15 yards away, trying to figure out a good place to hang a new decoration I had found. I heard the 5 year-old first. "Aubrey fell in the fire!". I'm not sure what exactly happened next, as aderenaline took over my brain, but I got to her, got ice from the cooler, put it in a lunch cooler, and put her hands in it. They were... grey, wrinkled, loose... not really hands anymore. I ran back and forth between my husband and my best friend, trying desperately to think of the best thing to do. Leave Jo at camp while we went to the hospital, or bring her? How long would we be gone? How far away was the car, anyway?

Finally, the whole family squished into Scorch's mini cooper, and he drove us to our car. We loaded the girls in the van, and I set the GPS for Hospital. Scorch had broken an ankle somewhat recently, and warned us that the "H" signs were right, not the GPS, once we got close. And off we drove. Aubrey was still screaming at the top of her lungs-- the poor thing was in so much pain, even the fast-melting ice couldn't stop it. Tony drove, and we both panicked and worried the whole way there. 40 minutes later, we pulled up to the hospital ER. Tony took Aubrey into his arms and took her in.

I parked the van and went in with JoAnn. I gave the nice man at the desk her name, insurance card, and date of birth. He knew the urgency, and told me to just go back and we'd find her. Now it's not like the ER was empty, but yet we found her directly ahead of us. Nurses were pouring sterile water over her burns into a pail, and the doctor was giving her morphine and cutting off her clothes. ...

Cut to 20 minutes later, and she's quiet now, as the morphine has kicked in. Nancy has arrived and told the staff she's my sister (and she is, genetics notwithstanding). I am given paperwork by the ER staff, and the doctor says that because he doesn't have experience with pediatric burns, and he can't be sure how severe they are with all that dead skin attached, he recommends a lifeflight to the nearest burn unit. We opt for Allentown over Baltimore, and the chopper is on its way.

There is a 200 lb maximum for riding along in the helicopter. I weigh 217. I am too fat to help my baby. Tony rides with her, and Jo and I climb into the van for a 4 hour drive to Allentown. The helicopter ride lasts 45 minutes. I call my Mom and Dad, who are at a party in Harrisburg, and tell them to get to Allentown. Now. I can't and don't elaborate except to tell them that Aubrey has fallen into the fire and got burned, and it's bad.

The next hours are blurred in driving and trying to stay calm. By the time I arrive at Lehigh Valley Hospital, she is in a room on the Pediatric ward, and is scheduled for surgery in the morning. My parents (Gods bless them, so very much) take Jo to a hotel, and Tony and I spend a sleepless night in the hospital. The next room was home to an infant (don't know what was the ailment) who cried ALL NIGHT. Poor thing. Poor us!

The surgeon rode up just before surgery, on his motorcycle, wearing his Ed Hardy tshirt, and told us not to worry. It was like a scene from ER. An hour later, after surgery, and she wakes up. The doctor has removed all the skin from her hands and forearms and has sewn onto her this still verrrrry new material called biobrane. Her hands are then coated in sheets of silver leaf, which is anti-microbial. What a relief, after hearing so much about the horrors of antibiotics, and hearing about what the treatment for burns was just 10 years ago.

We were in the hospital for 8 very long days and 7 interminable nights. By the time we left, she was able to change her own dressings, and her wounds were a mass of scabs.

She was stronger than I could have ever imagined, stronger than anyone can expect a 6 year-old to be. She has no scars on her left hand. You'd never know that anything happened to it, except for slight discoloration if you look really close. Her right hand, her dominant hand, with which she stopped her fall, is not so lucky.

She has scars on all her fingers (but not on her thumb) that cause her fingers to bend in. She can't spread her fingers out like a fan. The skin doesn't look very much different, but one touch will tell you that those fingers aren't normal. The skin is thick and rough and looks like an old man's. It is soft to the touch except for on the edges of her fingers where the scar tissue is very thick. This is also where the seam was in her biobrane bandaging, and I'm pretty sure that's not a coincidence.

Her handwriting has been affected, as has her self-esteem. Although that's hard to judge entirely, as girls her age are normally very concerned with what their friends think.

She amazes me everyday with how fast she grows, how smart she is, how like me she can be, and yet how foreign. She is beautiful and strong and brave and clever and mine. She is mine. My girl. My Aubrey.

I love you, baby. You are my little phoenix, always rising from the ashes stronger and more magnificent than before.
Posted by PickleLady at 1:06 PM 1 comment: Links to this post 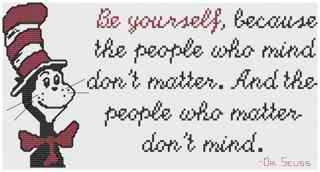 Happy Birthday, Dr Seuss!
available in the etsy shop.
Posted by PickleLady at 7:48 PM No comments: Links to this post

I didn't even make it a week of consecutive blog posts! So, what have I been up to the past couple of days?

Yesterday I had an exam and a quiz and wrote a paper. The rest of the week includes another paper, a homework assignment, and another exam. Hooray for the week before Spring break!

I've also been working on patterns, and stitching up (slowly) a new design for a business card. and I FINALLY digitized some of the Douglas Adams patterns, so I can offer them as professional-looking pdf files instead of scanned hand-drawn patterns.

Ok, off to work on outlining notes for Thursday's exam.
Posted by PickleLady at 11:37 AM No comments: Links to this post